English and Italian version below 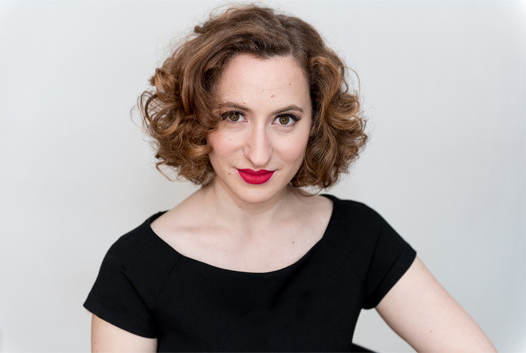 Cécile Achille made her stage debut in 2011 at the Opera-Comique as Antoinette (in Hahn's O mon bel inconnu). She works under the direction of conductors such as Emmanuel Olivier, Lionel Sow, Julien Chauvin, Emmanuelle Haïm, Laurence Equilbey, Alain Altinoglu or even Paavo Järvi; and with stage directors like Marguerite Borie, Emmanuelle Cordoliani, Vincent Vittoz, Pascal Neyron, Jeanne Debost, Florent Siaud, Charlotte Nessi, Thierry Thieû Niang, Michel Fau, Guillaume Gallienne and Jérôme Deschamps. In concerts, she performs on different festival stages and in concert halls such as the Théâtre du Châtelet and the Salle Pleyel in Paris, and she sang the soprano solo parts of Beethoven's 9th in the Folles journées in Nantes under the direction of Pascal Rophé.

Passionate about Mozart's repertoire, she embodied Papagena under the direction of Nicolas Krüger, and Ilia with the Compagnie Opéra 3. Her love for Early Music leads her to play the Italian Comedy in Les Funérailles de la Foire, Eglé (in Gluck's Echo et Narcisse) Eunone and Proserpine (in Charpentier's La descente d’Orphée aux Enfers) with Le Concert d'Astrée, to perform Poppaea in Monteverdi's Incoronazione, Flore in Rameau's Naïs with the Warsaw Philharmonic, and Diane in Charpentier's Actéon at the Opéra Royal de Versailles.

As member of the Académie de l'Opéra-Comique in 2013, she maintained her taste for the biting character of the opéra comique and the operetta. She played Françoise in Hahn's Ciboulette, Maguelonne in Viardot's Cendrillon and Lucine in Roussel's Le Testament de la Tante Caroline with Les Frivolités parisiennes.

After being awarded the 2010 singing prize of the Académie Internationale de Musique Maurice Ravel, her love for chamber music flourished with several ensembles, including the Trio Marie Nodier specialized in romantic and contemporary repertoire with the clarinettist Claire Voisin and the pianist Marina Pizzi, as well as the duo with the pianist Florence Boissolle.

By interpreting Rossini, Bizet and Stravinsky, she won the 2nd prize in opera performance in the Concours International de Chant de Marseille in 2017, and she got the special prize of the Statna Opera Banska Bystrica of Slovakia as part of the Gabriela Benackova Competition in 2018 with singing La Sonnambula and Ophelia.

In recordings, you can listen to her singing La Paix in Charpentier's Les Arts Florissans, in the album Messe du Roi Soleil, a collection of motets by Delalande and Lully recorded with the Ensemble Marguerite-Louise under the label “Château de Versailles Spectacles”,

During this season, she will go on tour in Potsdam with Charpentier's Les Arts Florissans, and across France and Belgium with Georges Dandin by Molière and Lully directed by Michel Fau.

Trained from childhood within the Maîtrise Notre-Dame de Paris, she then attended the classes of Mireille Alcantara and Elène Golgevit at the Conservatoire National Supérieur de Musique et de Danse de Paris. She also had access to guidance from Chantal Mathias and Christiane Eda-Pierre.